A photographer’s voyage through South Georgia, the Falkland Islands, and Antarctica

I love to explore new places in a loop. Going in a loop means that something new is around every corner. When I hike in new places, I always take the loop route when offered. Exploring the Antarctic is no different.

Traveling in a loop is a great way to experience and photograph the wildlife and landscapes at the bottom of the world, and it follows in the footsteps of explorers that pioneered the area not too long ago. Barely more than 100 years ago, Ernest Shackleton hiked over the summits of South Georgia Island while attempting to save his expedition from starvation. Today, embarking on a loop around the Falkland Islands, South Georgia, and Antarctica is a thrilling adventure for photographers. The risks are substantially less, and the photographic rewards are numerous.

For most of us, this journey begins with a long flight south to the end of the world, to the tip of South America, Tierra del Fuego. From there, the land ends abruptly into a vast expanse of ocean. The seas are notoriously rough and can be trying for ships, but that is part of the intrigue. Or perhaps it’s the myth of sea serpents inhabiting these waters, as noted in many historical captains’ logs.

Tiera del Fuego is an island archipelago covered in glaciated peaks rising from the ocean at the tip of South America. The area’s inhabitants live in a few cities where access to the southern oceans begins.

The first destination on this loop is the Falkland Islands, reached either by flight or ship from Punta Arenas, Chile, or Ushuaia, Argentina. The Falkland Islands greet you with their wind-swept rolling hills inhabited by many birds. With thousands of miles of shoreline, these islands are an oasis for birdlife, with impressive colonies of penguins, seabirds, seals, and even whales.

The capital of the Falklands, Stanley, is home to a weary crew of locals used to dealing with life’s challenges on their own. They understand the unexpected journey ahead of you and are happy to share a smiling face and their hospitality before you depart.

From the Falkland Islands, it takes 2–3 days at sea to reach South Georgia Island, or as I like to call it, the Land of the Lost. One of the most isolated and inhospitable places on earth, South Georgia greets you with snow-capped peaks, a rocky coast with crashing surf, and a mind-blowing amount of wildlife, perhaps the greatest concentration of wildlife in the world. Every bay and beach offers a variety of penguins, both king and gentoo, with harems of elephant seals. Many seabirds, like petrels and albatrosses, use South Georgia as a nesting ground.

I’ve been on many wildlife safaris and expeditions, and an expedition leader’s normal job on such a trip is tracking and locating wildlife. That’s not the case in South Georgia, where wildlife is everywhere. Finding a safe spot for humans to come ashore becomes the primary job. Hundreds of thousands of curious penguins aren’t the issue. Thousands of elephant seals line many of the beaches, and giant male elephant seals weighing up to 4 tons viciously fight other males to control their harem of female seals. Fur seals are also notoriously territorial with humans as well. On my last journey, there was one location with not a single square foot available for our group to go ashore due to the abundance of seals and penguins.

Approaching from the Falkland Islands, South Georgia begins with Trinity, Willis, and Bird Islands. From there, you approach a series of bays: Right Whale Bay, Sunset Fiord, Possession Bay, Antarctic Bay, Fortuna Bay, and the one with a former whaling settlement called Husavik in King Edward Cove. Each of these bays offers incredible landscapes above beaches lined with tussock grass and abundant wildlife. In the water, you’ll find rafts of penguins and sometimes leopard seals hunting them.

As the island turns south, there are a few more bays to visit, one being St Andrew’s. St. Andrew’s is home to an enormous colony of king penguins, with the latest count at about 150,000 pairs of birds. This location is why you bring those extra memory cards. The photo opportunities are limitless, and the sheer quantity of penguins and elephant seals will test your ability to pick out scenes to photograph.

The last stop on your South Georgia visit might be a long narrow fjord on the southern tip of the island, Drygalski Fiord. During my recent visit, our 250-foot-long ship needed to turn around because of sudden 60-knot winds that could have pushed us into rocks had we continued. The images were spectacular, but it became dangerous to even stand on the bow to capture them.

Your memory cards are probably crammed full of images at this point in the journey, but it is time for the ship to head south to the Antarctic Peninsula. During the journey, temperatures drop, and albatrosses, petrels, and even whales follow you.

After a couple of days at sea, snowy mountains appear in the sea, almost like clouds at first. The first of these mountains is Elephant Island, made famous as a refuge for Shackleton’s Endurance crew while they awaited rescue. Elephant Island and the rest of the South Shetland Islands offer an entirely different environment. These high rocky peaks are covered in deep snow and are permanently glaciated. This is also the spot where you might begin seeing large tabular icebergs. These behemoths broke loose from the ice shelves of Antarctica and can be blocks or even miles long.

After a brief crossing of the Bransfield Strait, Antarctica is in your sights. There is so much ice in the Antarctic Peninsula that landing spots are few. While it may seem bleak and barren, wildlife abounds here. The Southern Ocean is rich with phytoplankton, krill, fish, and squid. These small creatures provide abundant food for seals, penguins, whales, and birds.

As a photographer, your options are endless. A long telephoto lens will capture porpoising penguins and breaching whales. A wide-angle lens will capture the stunning blue color of icebergs above and below water. A 70-200mm lens will be perfect for the countless landscapes available from the deck of your ship. Something is happening around the ship all day, even when the weather is inclement. Depending on the time of year you visit, you might be treated to endless sunsets and sunrises. The blue, orange, and magenta hues created by low, antarctic light striking the icy mountains and icebergs are mesmerizing to watch and photograph. Penguins are found on icebergs, and seals are often lounging around on the tops of sea ice.

At this point, your ship points north for the return journey to Ushuaia, Argentina, across the Drake Passage. Seas can be calm or turbulent on this crossing, and seabirds will follow you as they draft the ship. The two-day journey allows you to reflect on the epic loop journey you’ve just completed.

A loop through the Falkland Islands, South Georgia, and Antarctica takes time and diligent planning. But the journey is like no other, and the photographic rewards are worth it! We are currently slated to make this South Georgia/Antarctica loop journey in 2023 and would love to have you join us! How to plan a photography trip to Antarctica & South Georgia 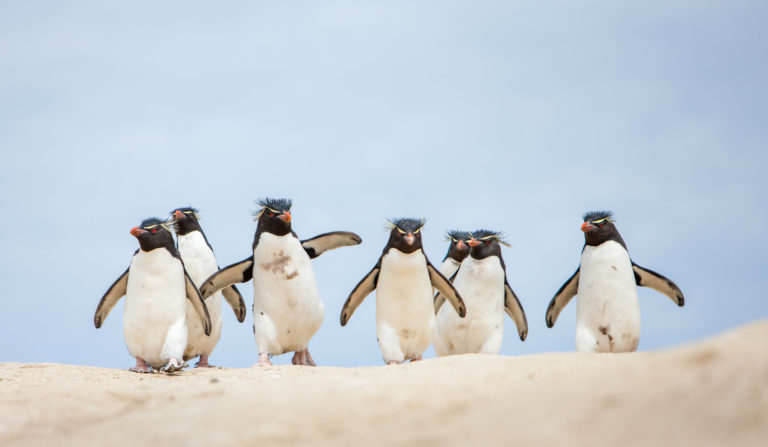 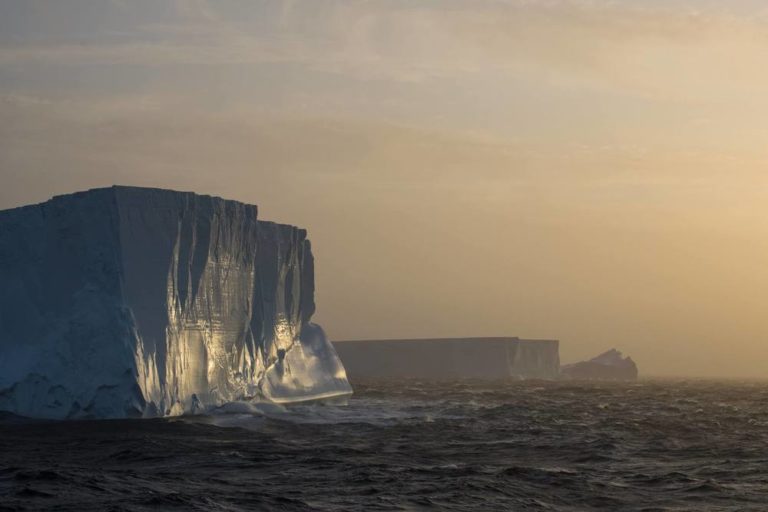 Photographers are flocking to Antarctica. Here’s why.

Ice-strengthened ships, modern technology, and sailing experience means that a journey to Antarctica is safer and smoother than ever. Despite Antarctica being stark, cold, and remote, it will inspire and amaze photographers.