Note: this post is about our Botswana Safari from June 2018, and is excerpted from Muench Workshops’ guest Larry Blau’s trip reports, thanks Larry! You can see more of Larry’s trip reports here.

Bush Planes and Camp Arrival. This plane was a one-engine prop that held all ten of us plus the pilot. I sat next to the pilot. The flight was forty-five minutes. As the plane got closer to the Kalahari, the terrain was turning into more desert. There were sporadic watering holes and we started to notice wildlife around the watering holes. We passed by a large single elephant and some zebra. We then landed on a dirt runway. The plane pulled up to two open-air safari vehicles, our safari guides were waiting for us. Our Camp was about a fifteen-minute ride away from the airstrip. We finally arrived at Camp Kalahari.

As we walked into the Camp, a large bull elephant greeted us. The camp staff told us that this elephant stays around the Camp and they have named him “George”. How amazing this was. I was awestruck by the size and beauty of this animal.

Night Game Drives. It was now time to board the open-air vehicles for some night photography. We were going looking for Aardvarks. Aardvarks are nocturnal. You may think that we are in a desert, but it is quite cold at night. Our guide had a huge floodlight and as he drove, kept on scanning the high grass for nocturnal animals. We came across a springhare, but he called it the “African Kangaroo”. It is a small animal, with a long tail that hops through the grass. We also came across two porcupines. I did not know that they are nocturnal. The driver finally spotted an Aardvark. They are funny-looking creatures with large ears and look similar to a giant mouse. He stopped the vehicle and the Aardvark crawled into a hole. We all got out and saw the Aardvark digging inside the hole, deeper and deeper he went. A great sighting, but not a photograph this time! What an interesting day this was. I could have never imagined that I would one day be in the Kalahari Desert and stay in a Safari Camp.

Wakeup call. Before sunrise, we are greeted by a soft knock at the tent, and a voice: (softly, lilting, and getting a tiny bit louder, each time), “hello….”, “helloooo….”, “good morning…”, “hello…”. What a beautiful way to wake up. The voice brings coffee and tea and a morning biscuit to us in our tent. Now it’s time to hop in our custom land cruisers and head off to the meerkats. Our local guide gave us a great narrative on the family structure of meerkats. There is one alpha male and one alpha female. The alpha female is the one who normally gives birth to offspring and the others help raise them. We eventually arrived at their den, after sunrise, and just waited around for the first one to appear. The way you normally take pictures of meerkats is that you get down on your stomach and lower yourself to their height. The first one appeared. When they come out they turn their heads almost three hundred and sixty degrees looking for any predators such as foxes, eagles, and small mammals. Eventually, the whole family came out, including the young, to warm themselves. By that time most of us were lying on our stomachs waiting for them to do something and clicking away. They then started to move away from their den and forage for food, digging for insects and scorpions. Such beautiful, tiny, cute, social creatures, I was deeply moved!

The San Bushmen. This afternoon, a group of San Bushmen came to the Camp. There were men, women, and children dressed in their traditional clothing, which consisted of hides with some ornaments. They then took us for a nice long bush walk and spoke to us about all the grasses and plants they eat and use for other purposes. A woman stopped at a bit of long grass and started to dig. She eventually dug up a huge tuber which was the size of a volleyball. She handed the tuber to one of the men and he shaved off some of it and showed how they squeeze out the watery liquid inside. Survival. He then handed it back to her and she reburied it to grow some more. These people live off the land. They are not farmers, but they do hunt. They showed us a tree that they make poison from and then put the poison on arrows to hunt game. They eat everything they kill and are very responsible towards the land. They then led us to a large watering hole where we took some great pictures of them as the sunset. The sunsets here are truly awesome, the colors cannot be described. What a way to end the evening, enjoying a campfire next to a Makgadikgadi watering hole surrounded by a dozen San bushmen!

Dinner. Dinner was very tasty beef and a potato pie. I then went back to my tent, and as I walked back, I almost walked into George. Remember him? He is the local elephant that roams around Camp. George walked right by our tent and as I write this I can still hear him outside roaming around. How wonderful to be a guest in the animals’ world!

Truly The Middle of Nowhere. We then boarded our quad bikes and it was off for a ninety-five-kilometer ride over the Makgadikgadi Pan. Once we got out to Salt Pan, we really opened them up to about seventy km/h or 45 miles per hour. I felt exhilarated and refreshed. We were in the middle of nowhere and going to someplace I had never even heard of. The quads created some dust and we were wearing turbans over our heads, Lawrence of Arabia style. The sun was very intense, but it was not extremely hot. We stopped for lunch in the middle of nowhere.  We made our way over this flat type of topography sand could see what looked like water in the distance. Of course, those were mirages. At age 69 I was driving a quad cycle over the Makigadigadi Salt Pan. What an experience. Sometimes the drive was through curves and around and through tall grasses that looked like dune grass. When we had to go over rocks we had to slow down and the rocks created quite a bumpy ride. We finally arrive at “Lost Island of the Baobabs.” Baobabs are weird-looking trees that have huge trunks and some of them are over one thousand years old. They are only found in a few places in Africa, Madagascar, Arabia, and Australia. This is no ordinary island. I see that there is a full kitchen setup, and dining tables, sleeping areas, and changing tents. Home for a couple of nights of night photography! We shoot amazing sweet light landscapes of these magnificent baobabs at sunset, and then blue hour afterward. Then our camp staff serves us an amazing three-course bush dinner, under the stars and guarded by one of the largest baobabs. After dinner, we all go just outside the camp and set up for our all-night star trail and time-lapse photography. We are intent on capturing the Milky Way behind the beautiful baobab silhouettes. Once set up and ready, I am about to call it a night and crawl into my large sleeping bag on the ground. We were not using tents. Just us all lined up in sleeping bags on the ground with the stars as our ceiling. The sleeping bag has a hot water bag in it. I wonder why?

An Amazing Wildlife Experience. I had an amazing photography experience our last morning in the Kalahari. Knowing that my chances are almost zero that I will ever return to this remote part of the world, I hoped that the Kalahari would give me a grand send-off and she did. We started our morning by all meeting at 6:00 AM for our game drive to look for wildlife. As the sun began to rise, we came across a large herd of wildebeests grazing and playing. The sun was rising in the background that created a beautiful scene. We then drove and drove looking for some more wildlife. Our guide and we decided to look for the lion that had been spotted over the previous days. We drove and drove but saw nothing. Finally, we got out to the start of the Makgadikgadi Pan and then we spotted them. Two lions, male and female, and the male was following the female. It is unusual to see lions in the Makgadikgadi and since there was no grass around, they were both visibly outstanding. Each sat down facing the other. Then the fun started. The female started to taunt the male. The male chased the female a little and then the female gave up. The five of us couldn’t believe what we were seeing and couldn’t stop clicking. A little about lion breeding. Lions breed for three straight days in twenty-minute intervals and do not eat during this time. The alpha male normally has a few females. The females are the hunters. The males are kept by the females and their only purpose is to breed. What an animal. If a female gives birth to cubs that are not the alpha male’s cubs, then he will kill them. The urge to pass on the alpha male’s genes is very strong. This is what the Kalahari gave me for a going-away present. My images appear to be outstanding.  Being in the right place at the right time. A memory that will last forever. Thank you, Kalahari!

Africa has gotten into my soul. The serenity, calmness, stillness, and beauty of the bush are tranquilizing. You lose track of everything outside and appear to be engulfed in a world that is far away from everything. For me, it was mental, spiritual, and photographic nirvana.

How I will cope with the reality of being back is for another day. 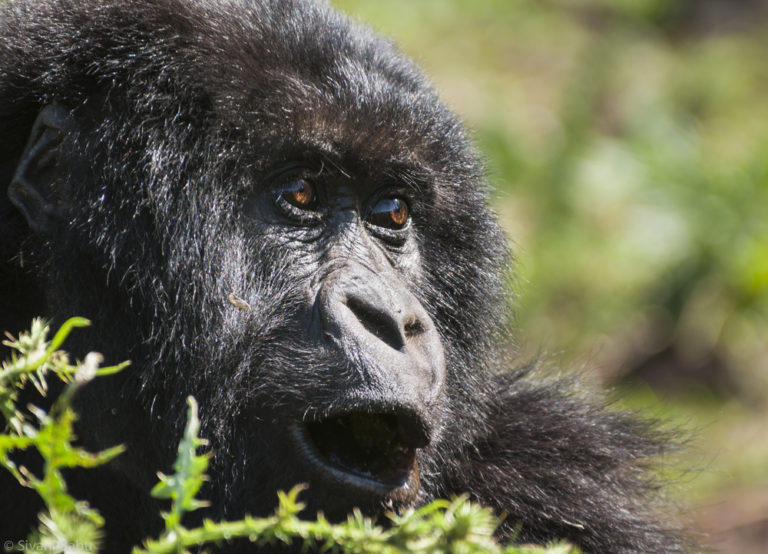 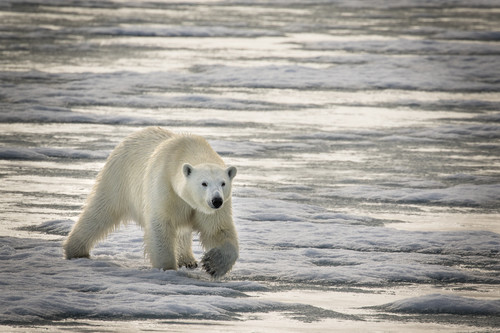 I was amazed by the amount and variety of different landscapes and wildlife we photographed in icy, remote Svalbard. 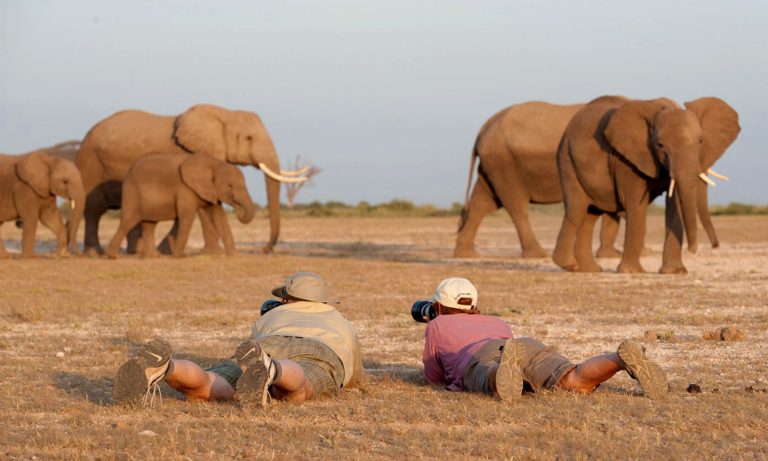 How can anyone possibly experience a place even a fraction of the size of the continent of Africa in such a short period of time?